From Halo
Jump to: navigation, search

Each data pad has its pad number hidden in the text of its first page, for proper ordering. 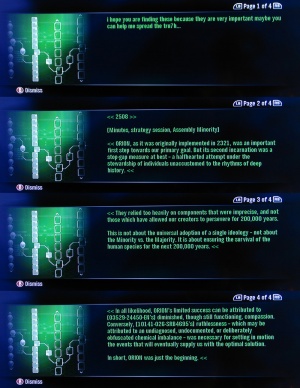 i hope you are finding these because they are very important maybe you can help me spread the tru7h...

<< ORION, as it was originally implemented in 2321, was an important first step towards our primary goal. But its second incarnation was a stop-gap measure at best – a halfhearted attempt under stewardship of individuals unaccustomed to the rhythms of deep history. <<


<< They relied too heavily on components that were imprecise, and not those which have allowed our creators to persevere for 200,000 years.

This is not about the universal adoption of a single ideology – not about the Minority vs. the Majority. It is about ensuring the survival of the human species for the Next 200,000 years. <<


<< In all likelihood, ORION's limited success can be attributed to [03529-24450-EN's] diminished, though still functioning, compassion. Conversely, [10141-026-SRB4695's] ruthlessness – which may be attributed to an undiagnosed, undocumented, or deliberately obfuscated chemical imbalance – was necessary for setting in motion the events that will eventually supply us with the optimal solution.

In short, ORION was just the beginning. <<