Section 3 is an ongoing Halo community game, of sorts, taking place in community forums, chat, and at times within the game itself. Primarily, it involves a number of AIs and operatives working to locate Forerunner sequences which unlock additional Halo lore and game assets. Some operatives are also enemy agents infiltrating the communications, working against community and Section 3.

Following is a collection of tidbits found or discovered related to Halo 4 fiction, through bulletins, videos, promotional material, etc.

Four of five communications were discovered scattered within Waypoint bulletins leading up to the release of Halo 4, codenamed Eleventh Hour. These are communications between "Codename Surgeon" and "Codename Coalmine", outlining the state of the Covenant war. 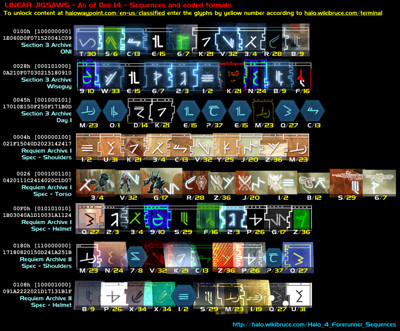 Based on the Forerunner character set used on HaloWaypoint.com "Classified" code entry page, characters have been discovered embedded in various media releases, as well as in-game content.

A series of community-released videos are released containing the Didact symbol in natural environments, followed by a number at the very end.